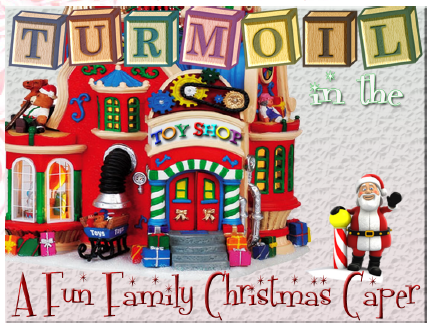 Drop them off so you can go Christmas Shopping!

It was time for the annual pre-Christmas toy production meeting in Christmas Village!  Mrs. Santa sent the  announcements to those most involved in the “Big Delivery” on Christmas Eve.  The day of the meeting arrived, and Christmas Village quickly became deserted as the worker elves – who were given the afternoon off – went to have a blast at a Holiday-themed Amusement Park called Yule Tide World in Gingersnap Village.  As expected, Dank the Elf staged an enormous protest about the elves having a break, but Santa had the final say!

The meeting attendees flooded into the toy shop board room,  and the gathering kicked off with fun Christmas games.  After the ice was broken and everyone mingled abouth and enjoyed yummy appetizers, the paticipants talked Santa into playing a few more hilarious Christmas games for the North Pole is a playful place – how could Santa say no?  Even amidst the joyful yet competitive spirits, accusations flew about the room regarding “who” was currently holding up the Christmas toy production and sleigh loading processes.  About Midway through the meeting, Santa discovered the ultra-important Naughty and Nice List was missing from his inbox!  To avoid a Christmas disaster, the North Pole leaders quickly rallied together to investigate who took the Naughty and Nice List before Christmas was ruined!  The culprit had to be caught!  After an intense investigation, the meeting participants took turns accusing who they believed stole the Naughty and Nice List and what their motive was to steal it.  After taking a break to play some stress-relieving Christmas games, the Christmas leaders one by one quizzed each other on Christmas Carols and then came clean with their involvement(if any), and the thief confessed!  The meeting ended with a thrilling scavenger hunt for the missing Naughty and Nice List! Overall, it was a pre-Christmas meeting that will never be forgotten in the North Pole.

Stay In The Loop!