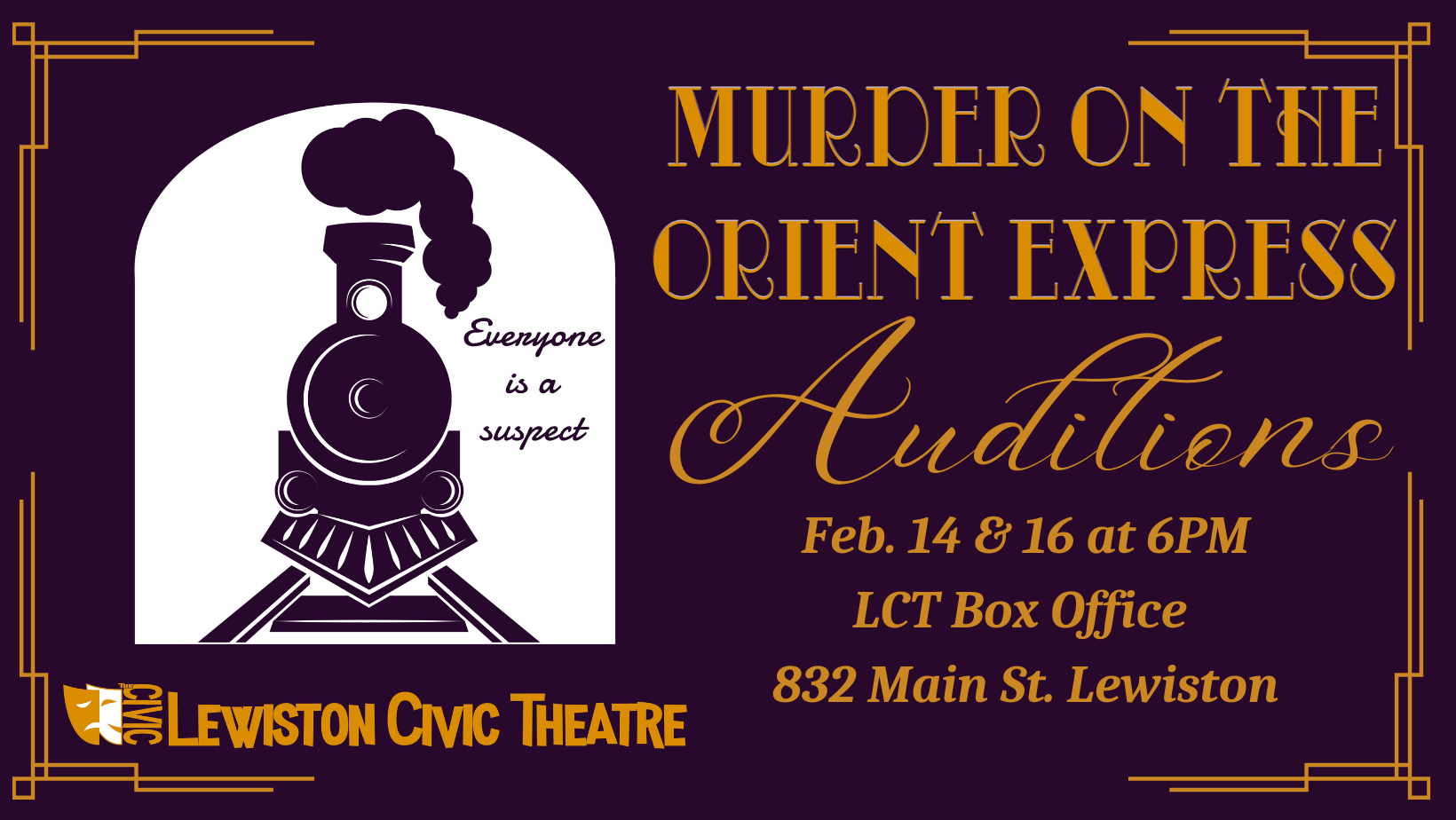 Come Join us at the Lewiston Civic Theatre for Auditions for Agatha Christie's Murder on the Orient Express, directed by Amanda Marzo
For more information, call the Box Office        Monday- Friday from 3-6 PM (208)746-3401
Email lctboxoffice@gmail.com or Message us on Facebook.

From the playwright who brought us Baskerville, Ken Ludwig, comes another murderously fun ride! One of Agatha Christie’s greatest novels springs to life in this thrilling new stage adaptation. Just after midnight, a snowdrift stops the Orient Express in its tracks. By morning, a wealthy American philanthropist lies dead in his compartment, stabbed eight times and with his door locked from the inside. Was it the Colonel, the Countess, the American traveler or the Russian Princess? Or perhaps it was the English governess, the American assistant, the French conductor or the Swedish missionary. The eccentric collection of passengers become suspects, and the world famous detective Hercule Poirot must identify the murderer before he or she decides to strike again!

Monsieur Bouc (Belgian, 30’s - 50’s) Director of Wagon-Lit, the train company that owns the Orient Express, a good humored man, playful, generous, proud, an excellent host with a love of luxury and grandeur. Exceedingly charming, and lives for his job.

Mary Debenham (British, 20’s - 40’s) A governess, capable yet romantic, anxious about her journey on the Orient Express, there is a sadness around her eyes, and she clearly has a secret and an unknown relationship to Colonel Arbuthnot.

Hector MacQueen (American, 20’s - 50’s) Secretary and assistant to Samuel Ratchett, tightly wound, edgy and nervous, always seems to be on the verge of falling apart. A person you would least suspect of committing a crime.

Michel the Conductor (French, 30’s - 50’s) Polite, hard-working, happy to have a good position on the Orient Express, eager to please. His hospitality is impeccable and is very attentive to the train’s passengers.

Greta Ohlsson (Swedish, 30’s - 40’s) Missionary, inherently odd, very strict and religiously devout, plain with a sheepish, almost frightened quality, Princess Dragomiroff is paying her way in exchange for helping her on her journey. She is easily upset and anxious. She seems like a person who couldn’t hurt a fly.

Countess Andrenyi (Hungarian, 20’s - 40’s) Beautifully and exquisitely dressed, like something out of a fairy tale, with a warmth that wins over everyone she meets. She is fiercely intelligent and is not afraid of getting her pristine hands dirty. However, this rose has thorns and shouldn’t be tampered with.

Helen Hubbard (American, 40’s - 70’s) Eccentric, bold and outspoken with a touch of flamboyance, from the American midwest, jovial, deliciously nosy and brash, often flirtatious. She can talk to anyone, even if they don’t want to listen. A mother with a song in her heart and a pep in her step.

Colonel Arbuthnot (Scottish, 20’s - 40’s) Handsome, very matter of fact, clearly has a secret and an unknown connection to Mary Debenham, he enjoys the sense of adventure that the Orient Express provides, takes charge when he needs to. Can be scary when pushed to his limits. He is quite protective over the people he loves.

Samuel Ratchett (American, 40’s - 60’s) American businessman with a gangster’s edge, evil at heart and frightening, unforgiving, stern demeanor, pushy, domineering. Has the energy of a wild animal in a cage.

Audition Dates
Monday, Feb 14th and Wednesday, Feb 16th / 6:00 PM
*You should only attend one night of auditions
There are potential callbacks on Thursday, Feb 17th

What to Prepare
Please bring a resume and a headshot. You will be reading the sides provided for the character you wish to audition for.

What to Bring
Those who audition must bring a resume and are strongly encouraged to bring a headshot. They must submit a Murder on the Orient Express Audition Form on the night you audition. Forms can be picked up at the Lewiston Civic Theatre Box Office (weekdays between 3PM and 6) This form has important calendar and schedule information that is necessary for the casting process.

Many of these characters speak with an accent. Accents are challenging, and no one is expecting you to have a perfect accent at your first audition. However, you are strongly encouraged to give it your best shot!

Rehearsal Information
Rehearsals are generally held Monday through Friday evenings. Actors are expected to volunteer some Saturdays to help build the set. Participating in a Lewiston Civic Theatre show is a serious commitment and rehearsal attendance is very important. However, we understand that you are volunteering your time and we will do our best to accommodate your schedule. Please make sure to list all known conflicts on your audition form. If cast in the show, please notify the stage manager of any new conflicts that come up. You will only be called to rehearsal when you are needed.

Lewiston Civic Theatre is following the CDC guidelines to ensure that we do not have to cancel a show due to quarantine. We are asking anyone who is participating in show related activities at the theatre to be vaccinated with both doses of the Covid-19 vaccine. Boosters are strongly encouraged, but are not required. We understand that a vaccination is a personal choice, but we want to make sure everyone is safe and we can continue to put on quality entertainment for our community. If you have questions about this policy, please contact us. If you need help finding a Covid-19 vaccination site, we are happy to assist you. If you are feeling ill, we will ask that you not attend rehearsal and Zoom rehearsal will be an option for you to attend.

Tech Week
March 27, 2022 – March 31, 2022
Tech week is the final week of the rehearsal process where all of the technical elements of the show are put in place. No actor may miss a rehearsal during tech week.

Stay In The Loop!